As more of the human genome is identified and characterized, new frontiers open for therapeutics. “The RNA interference (RNAi) research space continues to explode,” explains Susan Magdaleno, Ph.D., senior manager of scientists, RNAi technologies R&D, Life Technologies. “We are actually expanding into new content. Part of it is a result of the exploding data coming from next-gen sequencing-when you look at that content, it’s not messenger RNA. There are a lot of RNAs there that have yet to be characterized.”

“RNAi is a fast moving field-even incremental advances can result in high-profile publications,” agrees Paloma Giangrande, Ph.D., assistant professor, department of internal medicine, University of Iowa. “The promise of RNAi gets people excited, and any progress gets RNAi closer to the clinic.”

At CHI’s “RNA Interference: From Tools to Therapies” conference to be held in San Francisco next month, some of the latest tools and best practices captured from labs across academia and pharma will be described.

A noncoding RNA (ncRNA) is a functional RNA molecule that is not translated into a protein. ncRNA genes include highly abundant and functionally important RNAs such as transfer RNA (tRNA) and ribosomal RNA (rRNA). The number of ncRNAs encoded within the human genome is unknown, but Dr. Magdaleno says that her group’s efforts are to bring some functional analysis to ncRNA. “We’re starting to link ncRNA to disease, and it’s starting to grab the attention of investigators.”

ncRNA opens up novel targets for therapeutics. “Not all disease can be explained by changes in proteins, and there is only so much you can discover in proteins,” she adds. “Epigenetics is another area that is being greatly explored. ncRNAs might be influencing regulation at the epigenetic levels. The trick is to develop the tools that will allow robust functional analysis.”

Life Technologies developed a suite of integrated tools and workflows to discover, validate, and knock-down ncRNA to accelerate understanding of the function of ncRNA in the cell. At the conference, Dr. Magdaleno will describe requirements for using siRNAs to knock-down ncRNA and will highlight the application of siRNAs to investigate ncRNA function in regulating mitosis and apoptosis in normal and cancer cells.

“ncRNAs are not as well-characterized as messenger RNAs and many are not as abundantly expressed as messenger RNAs-low abundance is a challenge; many are only present under specific conditions. We don’t know why they are there, what happens to them, and whether we can develop therapeutic solutions based on ncRNA.”

Dr. Magdaleno’s group develops best practices for studying ncRNAs, which is not without challenges. “The ones we are g on are greater than 180 nucleotides. These are not highly characterized, there is no single fundamental source database of ncRNAs, nor is there an agreed upon definition of an ncRNA database. We are early in this field, but it’s important to determine functionality of these RNA species. We have the technology, but workflows still need to be figured out.”

Another quickly evolving area is Transkingdom RNA interference (tkRNAi), which takes a Trojan horse approach to solve one of the key challenges to RNAi therapeutics-delivery of the RNAi into the cell. Cequent Pharmaceuticals uses live attenuated bacteria to produce and deliver RNAi from the luminal side to the GI mucosa, allowing oral administration.

Johannes Fruehauf, M.D., vp of medical affairs, says that clinical trials are about to begin for the prevention of colon polyposis and for the treatment of inflammatory bowel disease. “tkRNAi technology s specific disease-causing genes safely, and effectively uses nonpathogenic bacteria as an engine to produce and deliver RNAi directly into cells.”

Results were recently reported from large screening efforts characterizing the effects of tkRNAi on cytokine profiles and innate immunity. “We have an IND and will be starting a Phase I trial soon. It also has a biomarker aspect to it to allow for efficacy readout, but primarily we have to see that the treatment is safe.”

Polyposis is an orphan disease, Dr. Fruehauf says, and its population has been heavily surveyed. “We know that it’s genetic and that 100% of patients will develop cancer. What happens is that, starting in the teens, hundreds to thousands of polyps develop in the colon. Eventually,  the whole colon must be removed. At present, there is no drug available to block polyps and make them regress.”

Dr. Fruehauf’s group targeted beta catenin, a well-known oncogene. “We have shown through several studies that if you block this gene, you can stop or block polyp formation. In our upcoming study, 18 people with this disease will be treated for one month. We’ll start with baseline biopsies and also collect end-point biopsies to see if there are any gene-expression changes in the gut.

“My talk will be on one specific aspect, immunogenicity, always an important question with RNAi drugs. We have done studies in mice to see if the vector itself suppresses gene-expression levels. We found that the effect of the carrier system is minimal, and the gene silencing effect is what is wanted. Oral delivery is the only way to get to the gut.” 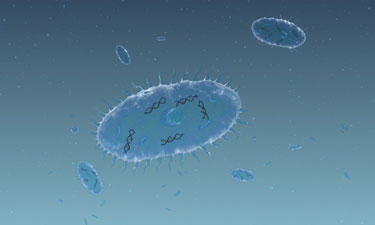 A major hurdle for the clinical translation of siRNAs into effective therapies is delivery. “Many delivery approaches for RNAi center on nontargeted delivery-not delivering treatment to where it needs to go,” Dr. Giangrande explains. “The majority of these treatments end up in the liver, which is fine if you are targeting liver disease. Not so much if you need to target elsewhere.”

At the meeting, she will describe an RNA aptamer-based approach for the targeted delivery of siRNAs to prostate cancer cells. The aptamer-siRNA reagent, or chimera, is effective when administered systemically, she says, and is suitable for efficient chemical synthesis. Studies have shown that when administered systemically to mice bearing PSMA-positive tumors, the RNA chimera triggered tumor regression without affecting normal tissues.

“We are also developing approaches that can help us identify aptamers or RNA chimeras that would allow us to deliver siRNAs to many different cell types. At the meeting, I will summarize some of the work already published  on prostate cancer. I will also present some recent progress on the development of approaches that may enable us to identify reagents that we can target to any cell.”

“Reagents should be in circulation for longer periods of time for cancer. Increasing and optimizing pharmacokinetics (PK) without losing efficacy is another big challenge. We are developing ways to optimize the PK of these reagents. Our hope is to get these targeted cancer therapies into the clinic.”

Atu027, a liposomally formulated siRNA that targets protein kinase N3 (PKN3) expression in the vascular endothelium, is another RNAi therapeutic that will be discussed at the conference.

“Atu027 targets the vasculature in the tumor; if the tumor gets no nutrition, it will not grow. It’s a novel approach to cancer research,” says Klaus Giese, Ph.D., CSO at Silence Therapeutics.

“The PKN3 protein acts in the tumor vasculature and that made it an addressable target. Systemic administration of Atu027 by repeated bolus injections or infusions in mice, rats, and nonhuman primates resulted in specific, RNAi-mediated silencing of PKN3 expression.

“We have shown the therapeutic efficacy of Atu027 in orthotopic mouse models for prostate and pancreatic cancers with significant inhibition of tumor growth and lymph-node metastasis formation. The tumor vasculature of Atu027-treated animals showed a specific reduction in lymph vessel density but no significant changes in microvascular density.”

Creating a delivery method had its challenges, notes Dr. Giese. “We faced a typical dilemma in that the siRNA oligonucleotide itself was not an ideal drug molecule for intravenous administration. It is large, and highly charged and rapidly cleared from the body. But our liposomal formulation of the siRNAs enabled us to trigger RNAi in the endothelium in a safe and effective manner.

“We have obtained new insight from Atu027 testing in additional tumor models supporting Atu027s antimetastatic activity.” Atu027 is currently being tested in a Phase I trial on subjects with advanced solid cancers. 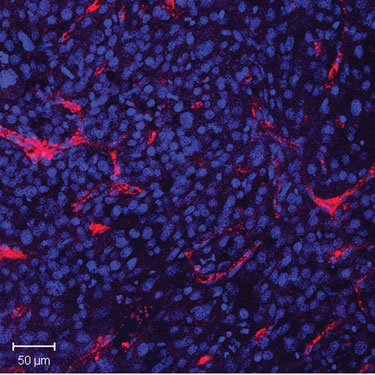 Much attention has been paid to double-stranded RNAs in the last few years, and there is a growing consensus about the  challenges in the field, namely delivery and off-target effects, notes Henrik Ørum, Ph.D., vp and CSO at Santaris Pharma. “As with new technologies, those issues are not easily solved. We’ve had significant interest in our locked nucleic acid (LNA) single-stranded format, as there are no issues with delivery and off-target effects as those seen with double-stranded RNAs.”

The LNA drug platform creates synthetically modified chemical versions of the normal nucleic acid building blocks of RNA. These modified chemical versions improve the drug-like qualities of resulting oligonucleotides by improving affinity to their target RNA, boosting resistance to metabolism, and improving tissue uptake. On systemic administration of these “naked” molecules, LNA-based therapeutics are delivered to their targets where they show efficacy as well as safety.

The company’s work with drug candidate SPC3649 will be presented at the conference, it was also published in Science in December. Dr. Ørum notes that SPC3649 targets and inhibits the liver-specific microRNA-122, which is required for hepatitis C virus (HCV) replication.

According to Dr. Ørum, SPC3649 provided continued efficacy in animals up to several months after the treatment period with no adverse events and no evidence of viral rebound or resistance. “The preclinical data show changes in the expression of key genes that may help patients who do not respond to interferon treatment to become responsive. This could be a real game-changer for the treatment of patients infected with HCV.”

Double-stranded RNA (dsRNA) triggers a series of biochemical events that culminates in sequence-specific suppression of gene expression. Long dsRNAs were used for years as a means to modulate gene expression in plants, yeast, and C. elegans. Rapid advances in smaller, synthetic RNA molecules over the last two years have led to the initiation of several RNAi clinical trials.

Dicerna Pharmaceuticals is working with Dicer-substrate siRNAs (DsiRNA). Dicer is a critical enzyme involved in the RNAi gene-silencing cascade. Dicer processing of double-stranded RNA oligonucleotides of 25 or more base pairs in length and transfer of the cleaved product RNA to the gene-silencing complex results in five- to tenfold more potent activity and longer duration of action.

“Our RNAi payloads are dramatically more efficient,” says Bob D. Brown, Ph.D., senior vp of research. “The challenge across the RNAi therapeutics field has been delivery. DsiRNAs offer a flexible platform for modifications that dovetail with a wide range of delivery technologies and mechanisms. We will exploit this feature to create successful therapeutics.”

Early last year, Dicerna secured the exclusive, worldwide right to grant sublicenses to the DsiRNA intellectual property estate in-licensed by Dicerna. Its pipeline of RNAi-targeted drugs and delivery systems is focused primarily in the therapeutic areas of oncology and metabolic diseases. In addition, it expects to use the Dicer Substrate technology in several other therapeutic areas such as inflammation, immunology, and cardiovascular diseases.